By entering this site, you agree to be bound by its terms and conditions of use.

Subscribe to the Champagne Delamotte newsletter to receive our latest news throughout the year !

CHAMPAGNE DELAMOTTE : 260 YEARS OF HISTORY, ONE OF THE OLDEST HOUSES OF CHAMPAGNE.

The birth of Champagne Delamotte

It’s in 1760, right in the middle of the intellectual, cultural, and scientific movement of the Enlightenment that Maison Delamotte was established in Reims by François Delamotte. Maison Delamotte it's first of all a family story between a father, François Dalamotte and his two sons, Alexandre and Nicolas-Louis.

François Delamotte, born in Reims in 1722, was “Conseiller-échevin” of Reims, captain of the bourgeois militia. Large owner of vineyards in Cumières. he establishes in 1760 a house of Wines of Champagne under his name in Reims, in the building located on the corner of the rue Cérès and the rue Marmousets, where his residence was located. The cellars were beneath the building in question. On the family blazon, the motto « Vive et me ama » (live and love me) was since that adopted.

He goes after in partnership with his eldest son Alexandre to create "Delamotte Père & Fils" ("Father and Son"). 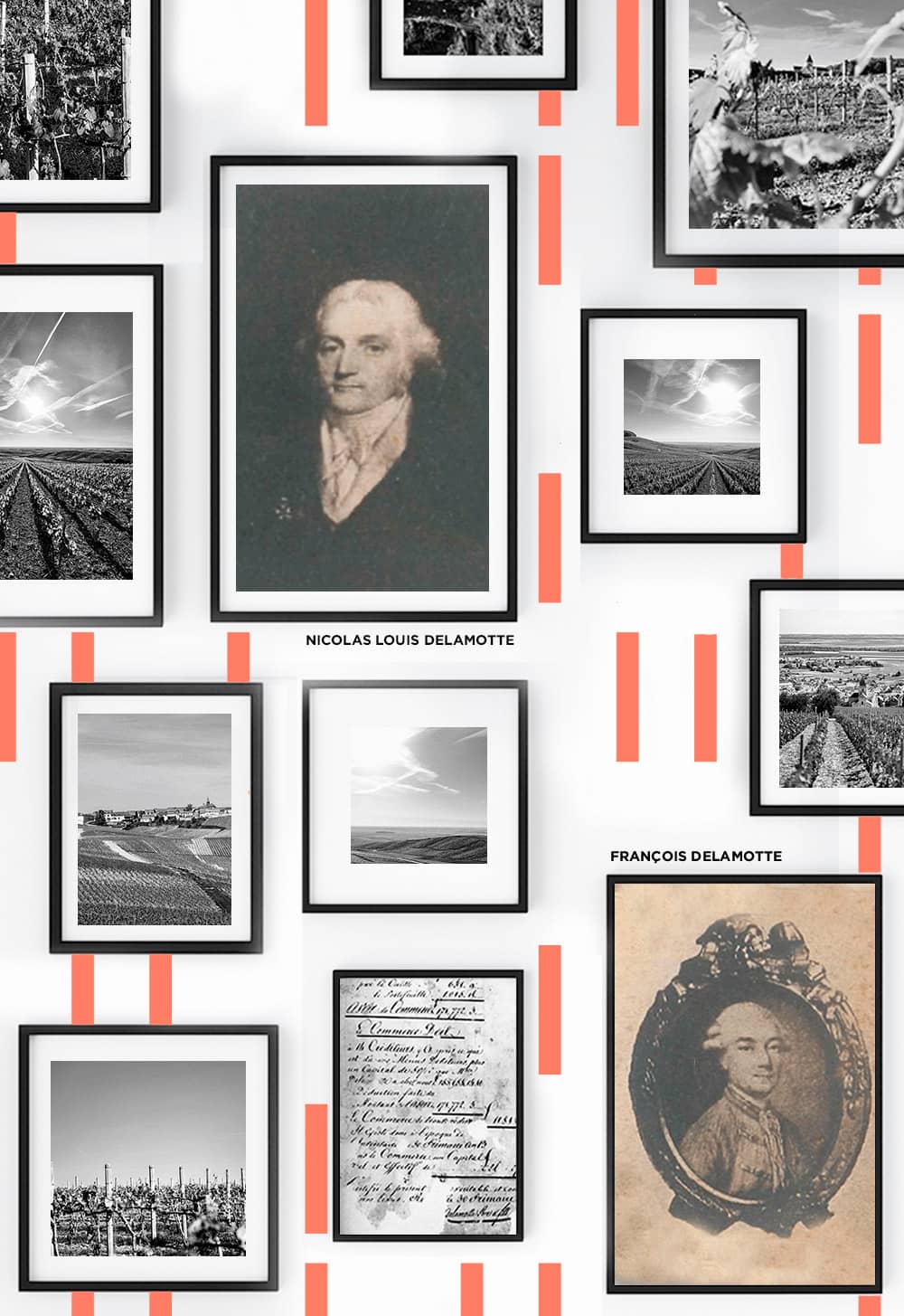 The arrival of Nicolas Louis Delamotte

During the dissolution of the Order of Malta after the conquest of the island of Malta by Bonaparte in 1798, the younguest son Nicolas Louis Delamotte gets back from the island, where he was a knight of the Order. He establishes himself in Reims and joins the paternal Champagne house. At this time, the eight-pointed cross of the Order of Malta appears on the blazon. Nicolas-Louis undertakes an exportation policy to make the brand Delamotte shine in the biggest cities of Europe and well beyond.

Once President of the Chamber of Commerce, in 1825, he takes part in the organization of the coronation of Charles X and on this occasion he is made Chevalier of the Royal Order of the Legion of Honor.

XXth century, the Nonancourt Family and its Inheritance

Marie-Louise de Nonancourt gives a second birth to Champagne Delamotte in Le Mesnil-sur-Oger in 1927, in the heart of the Côte des Blancs, in the kingdom of Chardonnay, the preferred grape variety of the house. Her son Charles, takes over the management of the house from 1948 to 1988. Her second son, Bernard begins his career with his brother at Delamotte before taking over in 1949 the management of the Laurent-Perrier house bought between the two world wars by their mother.

In 1988, Bernard de Nonancourt, establishes the Laurent-Perrier group by integrating the familly Champagne house Delamotte. This same year, Bernard gets the opportunity to purchase the neighbor of Delamotte, the legendary Maison Champagne Salon. He then fulfills a long-standing dream.

The destiny of both Salon and Delamotte houses have been linked ever since.

Since 1997, Didier Depond has been managing both Champagne houses: Delamotte and Salon. He develops the image and reputation of the two brands in more than fifty countries, making Delamotte’s motto “Vive et me Ama” resonate higher than ever.

Discover all our champagnes